I (W. Wertelecki, M.D.) see hypopigmented hair – some clinicians described the scalp hair as “silver-tipped” – in a previous image of this child-mother pair it was obvious that her daughter had partial albinism (hypopigmentation). In the context of concurrent medical history of recurrent viral and bacterial infections, the diagnostic possibility of Chediak – Higashi (C-H) syndrome became a strong  consideration.

PERSPECTIVE: As stated earlier, Chediak – Higashi syndrome was clinically defined before the nature of its etiology and pathogenesis was clarified.

The “clinical pearl” illustrated by this child underscores that clinicians, if clever, can define human diseases before basic sciences investigations find their causes and mechanisms. In fact, such “clinical epidemiologic observations” led to many more “gene-discoveries” than vice versa. Generally, the prognosis is grave. However, there are instances of milder forms. Severe forms have benefited from allogeneic (from unrelated donors) transplants. However, the benefits require as early as possible diagnosis and intervention. It is therefore important to have current information about therapeutic advances.

The C-H disorder is the consequence of a LYST (lysosome) gene mutation. The function of lysosomes is to digest bacteria and their toxic substances. The manifestation of a failure is visible by the presence of inclusion granules and enlargement of lysosomes in immune system cells. Please, see illustrations of white blood cells of this patient.

The pathogenesis (mechanism) of the C-H syndrome is manifested by not only partial oculo-cutaneous albinism and chronic recurrent infection but also by eye movements (nystagmus), clumsiness, seizures, bleeding … Please, see standard medical sources for further descriptions.

The disorder is rare and has been described in all ethnic groups. It represents an autosomal-recessive pattern (implying an association with parental consanguinity or ethnic isolates).

Back to Signs
Tags: Chediak-Higashi 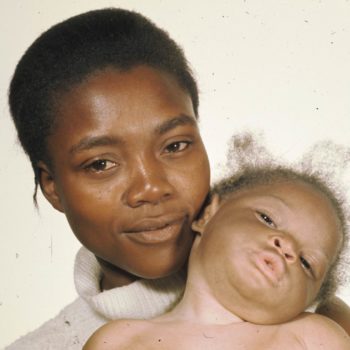